No items found.
Product is not available in this quantity.

No items found.
Product is not available in this quantity.

Why Choose Jenny Many?

Jenny Many is not just a series of books – it's an entire philosophy... 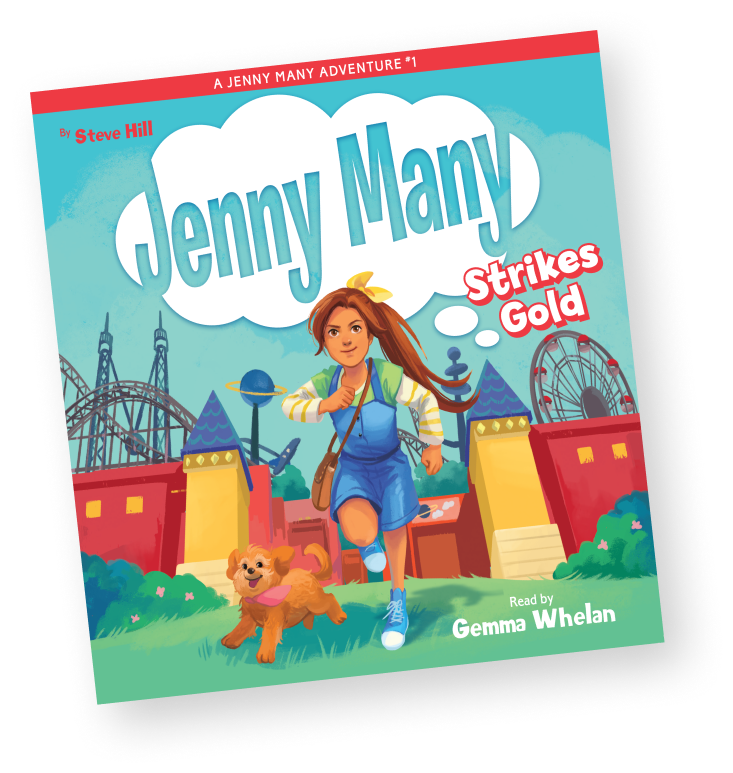 Why Choose Jenny Many?

The stories are at the heart of a 360° experience. Jenny is human and fallible, but immensely inspiring, too. In her adventures she experiences the ups and downs of peer-to-peer friendships, discovering that things are always better if you work together.
‍
Jenny is the proof that one small spark of an idea can lead to massive things when you reach out and share it with others. The series is underpinned by strong themes and a soft-learning objective to inspire girls to embrace the pursuit of authentic ambition.

What People Have To Say

“An exciting and contemporary antidote to the majority of pink, fairy/magic-heavy female-skewed fiction currently on sale in the UK & US...”

“Pacey plots focus on mystery and adventure, engaging the child from the first page. Expect lots of cliffhangers, suspense and surprises...”

Every story in the range is told in the first person, narrated from Jenny’s point of view. Her voice fizzes from every page, instantly hooking young readers into her world. Jenny is a dynamic, sociable girl from the iPad generation, using a variety of devices to look up information, share news and reach out to her friends. Running prose in the stories is broken up with IM chats, text screens and e-invites, propelling the story forward whilst breaking the text up into manageable chunks. Funny illustrations, age appropriate vocabulary also ensure that the audio books are inviting for the developing reader.

The series bubbles with situations and settings that children will relate to – friendship issues, school trips, annoying little brothers and sisters. At times however Jenny is an enthusiastic, but unreliable narrator. Her determination to get things done leads her to follow wild goose chases, make snap decisions and jump to all sorts of crazy conclusions! Deft storytelling allows the reader to seize and enjoy this superior knowledge, wondering how and when Jenny will figure things out for herself. The answer, for Jenny, is always waiting in the arms of her friends. When she works as one of many, amazing things start to happen.
‍
Jenny Many is a loveable tomboy – a refreshing and positive role model for young girls, who also just happens to be a-w-e-s-o-m-e! The stories are infectious, engaging and highly collectable. This exciting character-led series is just the thing for girls to read in between having a-w-e-s-o-m-e adventures of their own…

“Jenny codes, vlogs and researches information online, just like real school children. Although her use of IT reinforces genuine KS2/4th Grade activities, readers will be having too much fun to notice. Although she’s tech-savvy, Jenny is just as happy playing with her dog Trixie or hanging out in her treehouse.”

Our Tone Of Voice

Story is at the heart of Jenny Many. Every book in the series features a mystery/adventure plot that needs to be carefully pitched to engage the reader without becoming over-complicated. The storylines are pacey and the chapter endings are peppered with cliffhangers and surprises, compelling the child to turn the page to find out what’s going to happen next.

Every book is written from a first person limited omniscient viewpoint, with Jenny cast as our loveable (and at times unreliable) narrator. Her voice is conversational and welcoming, hooking young readers into the story from the very first page. Jenny is opinionated – that’s part of the fun – and sometimes is inclined to misjudge situations. When Jenny leaps on a red herring or jumps to a false conclusion, the child reader will enjoy holding superior knowledge for a page or two. Their view of the action is most closely aligned to Jenny’s best friend Hannah, who quietly observes what is happening from a short distance, but is happy to support her friend and let her drive the action forward.
‍
Jenny’s voice is key to making the book resonate with this young readership. There should be lots of humour, varied sentence structure and a fizzy, infectiously friendly tone. Jenny has a tendency to be dramatic in her reporting. She will, for example, often describe situations as ‘a matter of life or death.’ Her narrative should be peppered with asides, words capitalized for emphasis and exaggerated pronouncements. Jenny addresses her reader as if they are a co-conspirator, a close friend with whom she can share her most trusted secrets. Jenny’s voice has a natural confidence – the feeling that she can make anything happen if she really wants to.
‍
The series is set in the modern day and the characters are contemporary, twenty-first century children. Jenny and her friends are the internet generation – they have grown up with electronic devices in the home and at school. They confidently click, swipe, share and surf, reaching out to each other using email, texts and instant messaging. Occasionally Jenny’s narrative is punctuated by online exchanges with her friends, breaking up the prose and allowing the reader to hear other characters’ speaking first hand rather than via reported speech. Technology throughout the series is used responsibly and only as a dimension of Jenny’s life. Jenny does not yet own her own phone, but she borrows her parents’ and uses it under appropriate supervision. Positive tech has a key role in helping her solve problems in creative ways, but it is only a tool. Devices are used to help her push out to the real world to discover new things. Jenny and her friends know when to unplug and play.

“A highly collectable range, signposted with eye-catching covers that shout from the shelves. There is an over-arching series arc, but titles can be picked up and enjoyed in any order...”

Girls of six to eight are on the cusp. They are beginning to push away from their parents and seek out their own independence; and yet they still need their favourite teddy or a hug from mum every now and then. They are starting to challenge and question opinions, but at the same time they are easily influenced.
‍
This is the time where a young girl’s focus first starts to shift away from the family and out towards their peers. As the months roll on, these relationships will become more and more important. Defining social groups and establishing their rules of engagement is an enormous preoccupation, which can provide girls with a sense of belonging, but also some heartache too. Many teachers report that the progression through Key Stage 1 / 1st Grade and on into Year 5/4th Grade is the time when the girls in their classes experience the most conflict and upset, as friendship groups form, change and reform again.
‍
It can be difficult stage for girls as there is a conflict between wanting to assert their personality and a need to fit in and conform. A typical girl in this group aspires to behave like and live under the relaxed rules of her older sister, yet remains a child in many ways. They might like fashion and pop music, but also collecting stickers and watching Disney Princess movies, too.
At ten years old Jenny is an appealing and aspirational heroine for six- to eight-year-olds, facing issues that they can relate to. The target reader will enjoy watching how Jenny confides in her friends, as well as observing how she copes when a mean girl threatens to disrupt the status quo. At this time, their sense of humour becomes much more refined and they will appreciate the comic situations in the stories and the light-hearted banter with Dylan and the rest of the cast.
‍
Just like Jenny, our target reader will be moving away from playing with traditional toys and becoming more group orientated. This is the time that they often plunge into crazes and fads, using them as tools to try and find their place in the hierarchy of the playground.

“The characters’ world is expanded and enhanced by the Jenny Many website – an online 360° experience. The website builds upon the plots of the books, providing a safe environment for readers to connect, create their own stories and play imaginatively with Jenny and her friends.”

“A positive tech attitude is encouraged in the books, reinforcing the responsible and creative use of IT. Jenny uses her phone, tablet and other devices as a trigger to push out into real world activities. This theme is not currently represented widely in kids’ fiction despite the real-life prominence of technology in their lives. To address the challenge of identifying the benefits of the myriad of new technologies available to children today – whilst isolating the potential risks of overconsumption and online threats – the Jenny Many project will also provide a focal point for discussion about finding the right balance between the online and offline worlds in all areas of a young person's life.”